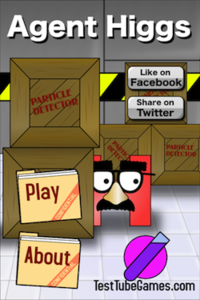 Agent Higgs is hiding from the prying eyes of physicists, and he needs your help! After playing through these addicting Particle Physics puzzles, you'll look at the Standard Model in a very non-standard way.

But don't be scared -- no background knowledge is expected or required. You'll learn everything you need to know along the way. The game starts off easy, getting slowly more complex. In this sliding puzzle, the pieces are particles, and the rules come from physics. Electrons are negatively charged and repel away from one another. Matter and antimatter annihilate in a satisfying explosion. Can you master the puzzles and outwit the scientists?

This game is freely available on the web to play, separated into two chapters. Chapter 1 deals with Electrons and Neutrinos, as well as antimatter. Chapter 2 focuses on Neutrinos, including all three types of Neutrinos and investigating their strange behaviors. The game is also available on iOS devices, with even more levels and even more physics.

The Particles in the game:

The Physics Rules you'll learn along the way: *Just in the iPhone and iPad versions 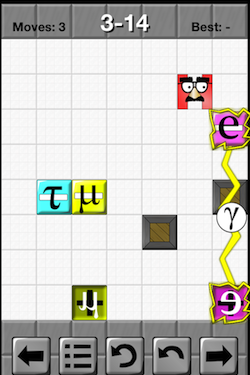 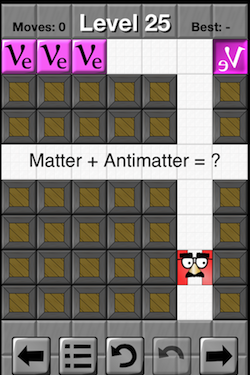