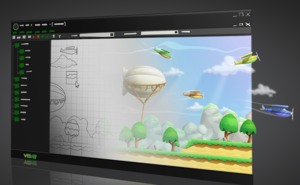 The GameMaker: Studio™ family of products caters to entry-level novices and seasoned game development professionals equally, allowing them to create casual and social games for, iOS, Android, desktop and the Web (HTML5) in record time and at a fraction of the cost!

As well as making games development 80 percent faster than coding for native languages, developers can create fully functional prototypes in just a few hours, and a full game in just a matter of weeks.

And when you're done, GameMaker: Studio™ will produce an "app store"-ready iOS, Android or OS X app, Windows executable or HTML5 code, all at the push of a button and all from the same source code.

Discover how easy it is for yourself and get access to GameMaker: Studio™'s key features – including its easy to use integrated development environment (IDE) powerful scripting language and Box 2D Physics – by simply downloading GameMaker: Studio™ for free.