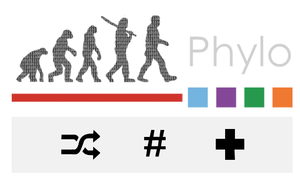 What's Phylo all about? The comparison of the genomes from various species is one of the most fundamental and powerful technique in molecular Biology. It helps us to decipher our DNA and identify new genes. Though it may appear to be just a game, Phylo is actually a framework for harnessing the computing power of mankind to solve the Multiple Sequence Alignment problem.

What is a Multiple Sequence Alignment? A sequence alignment is a way of arranging the sequences of D.N.A, R.N.A or protein to identify regions of similarity. These similarities may be consequences of functional, structural, or evolutionary relationships between the sequences. From such an alignment, biologists may infer shared evolutionary origins, identify functionally important sites, and illustrate mutation events. More importantly, biologists can trace the source of certain genetic diseases.

The Problem Traditionally, multiple sequence alignment algorithms use computationally complex heuristics to align the sequences. Unfortunately, the use of heuristics do not guarantee global optimization as it would be prohibitively computationally expensive to achieve an optimal alignment. This is due in part to the sheer size of the genome, which consists of roughly three billion base pairs, and the increasing computational complexity resulting from each additional sequence in an alignment.

Our Approach Humans have evolved to recognize patterns and solve visual problems efficiently. By abstracting multiple sequence alignment to manipulating patterns consisting of coloured shapes, we have adapted the problem to benefit from human capabilities.
By taking data which has already been aligned by a heuristic algorithm, we allow the user to optimize where the algorithm may have failed.

The Data All alignments were generously made available through UCSC Genome Browser. In fact, all alignments contain sections of human DNA which have been speculated to be linked to various genetic disorders, such as breast cancer. Every alignment is received, analyzed, and stored in a database, where it will eventually be re-introduced back into the global alignment as an optimization. For more information about any one of these topics, click here.

I really had a hard time figuring this one out, and before I did I gave up. It was simple at first, just move everything over to one side, but once you had gaps, it would never give the yellow star to continue. If the game is only about moving things to one side of the screen, then it's less than thrilling, but if I could figure out how to get the yellow star to light up once I start having gaps-- it just might be an interesting puzzle game. I am not a huge fan of games that take this much effort just to get started. Perhaps a couple of step-by-step tutorial rounds would be nice. The instructions on the separate tab were just a pain to remember once playing started.