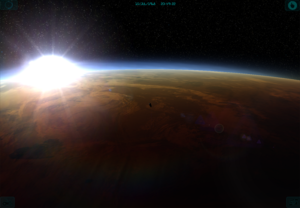 Primarily for entertainment: This game is not intended to teach, but rather to simply raise awareness and interest in a scientific concept.

Re-live those magical moments of going to the Moon that heralded the age of space exploration. Learn to fly the Apollo like a real astronaut. Guided tutorials show you how to use the Apollo Guidance Computer to fly to the Moon as the astronauts did.

Vote for us in Steam GreenLight

Space Simulator is a realistic space flight simulator for PC/Mac and mobiles. Explore the entire Solar System with its planets, moons and other major bodies.

Launch from the Kennedy Space Center; enjoy the view from a parking orbit; travel to the Moon with a Trans-Lunar Injection; arrive with a Lunar Orbit Insertion; land on the Moon with the Lunar Module; lift off back into Lunar orbit; rendezvous with the CSM and return to Earth with reentry and splashdown. With Space Simulator you can relive every moment of the Apollo program from the comfort of your home, choosing to take as little or much manual control of the spacecraft as you wish.

Re-enact historical missions or create your own custom free-flight scenario on any of the major planets or their moons with a spacecraft of your choosing.

Space Simulator creates a coherent accurately sized Solar System running on real physics. Using a proprietary physics engine, Space Simulator runs complex double precision simulations for the very first time on mobile devices. The level of detail of simulation is unrivaled. All cockpits come with comprehensive Multi Functional Displays reporting on every aspect of your flight data. The Apollo modules comes with the Apollo Guidance Computer and DSKY running actual code from the 60’s. All terrain is modeled with NASA imagery/altitude data.

Land on the Moon; enjoy the magnificent views of Earth from orbit; plan a trip to a faraway planet; practise your favorite maneuvers ­with gravitational slingshots, Hohmann transfer orbits, rendezvous or dock with the ISS; perfect your Space Shuttle landings or go to the edge of space and back with the hypersonic X­15 Aircraft. The possibilities are endless and as unbounded as your wildest astronautic dreams.