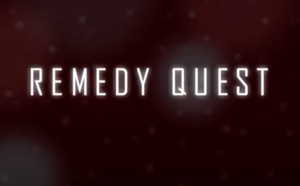 A review of Remedy Quest

You should play, and share! Vaccination and antibodies and hectic rush rush rush!

This game is hard, and you either have to read the instruction or get wiped out until you figure out why you keep losing. It is fun, to lose and struggle and it is totally possible to figure out why you failed, though you have to pay attention! The game plays very well on my Android phone, and It is surprising how much information the developers crammed into the tiny screen. The art is very well done! The colors and simple line drawing style convey a lot of information about the function of each remedy. Simple and informative is the key for teaching a complex system, I think. No need to make the UI or art complex, the game itself brings the complexity, which is the best.

Remedy Quest does a good job of showing you exactly why viruses are hard to fight. The viruses are random, hard to predict, and seem vaguely harmless until it's suddenly too late! The remedies that you can use are modeled after real immune system components, like antibodies that stick to the virus and that stick to the cell... All tools in the game are called "remedies" which I guess would make the whole experience more approachable for players. What do you think? Go get it n your phone and come back and tell us what you think!!

I personally do not like reading directions, and I like banging around until I figure out what's going on. This game is like a tower defense (or maybe a Castle Defense) kind of game. You start out with many weapons and so it is hard to see which weapon causes which effect on the virus. I think with the addition of simpler levels in the beginning, the game will be easier for stubborn non-readers like me! Once I put in the effort to understand the game mechanics, I found the game fun, and hectic... just like you want tour Castle DEfense game to be!

So play it! Be patient in the beginning, and give the scientist/developer feedback. She's looking for feedback to make this game even better.

Comments on this review

There are no comments on this review.