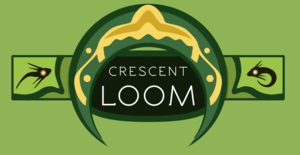 Crescent Loom is a game that provides an interactive model for the neural circuits that underlie movement. Players construct physics-based underwater creatures and weave their brains in order to solve puzzles and explore an alien ecosystem.

Current public understanding of how brains produce behavior is woefully lacking, and the technobabble in science fiction about the infinite complexity of the brain has reinforced this idea that it's too complicated for laypeople to understand. Crescent Loom is intended to demonstrate that some of the core concepts in neural circuits are things that can be grasped and played with.

It is a work-in-progress, but an online demo and updates are available at wick.works. Free web based demo. Mac, Windows, Web and Linux for $20. 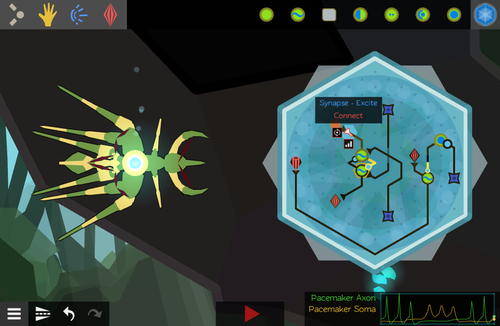 The transformative power of video games is to let you live in a fantasy land, where the problems to solve are exciting and important and your clever decisions drive some fun cool action... and science games are no different. Scientists get to address cool problems and they get to discover really new things. Scientists use clever tools and techniques to discover the mechanics of the world… how cool is that? So, a science game should put the player in the scientist’s shoes, but it should be fantastical, super awesome shoes: Give the player the tools you wish you had! Give the player the ability to do things that it takes you two weeks to do in the lab! And then, give the player the ability to see the effects of their clever experiment immediately. Doesn’t this sound like an awesome game?

This level of awesome is difficult to achieve. Crescent Loom manages is beautifully. In this game you can ask yourself, what if an animal only had muscles on one side of its vertebrae? Would it be more or less coordinated? In Crescent Loom you create an animal from the bones to muscles to neurons and then you create the brain to control the animal. Yes, it is an amazingly innovative game.

To use this game in your classroom, you could have your students make their creatures and then compare how well their creatures can swim. There is no multiplayer version and there is no game play, yet. But the game induces a competitive feeling and two laptops side by side would allow students to compete. Just getting that creature to be able to swim from one side of the screen to the other is quite a fun challenge.

The game is in early access on Itch.io. The developer is adding a ton of new features and smoothing out game play, and the end product is going to be really fun. It is going to inspire science games to whole new levels. So grab it and get inspired!!!