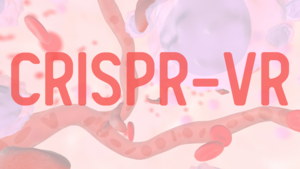 We’ve developed an immersive simulation of sickle cell disease and a potential CRISPR-based therapy for you to explore in virtual reality. VR users get to travel inside cells and tissues to see exactly how it all works. Informed by real data, structures, and other evidence, we made the science as accurate as possible. Please note that this is not an existing treatment, but rather a possible future use of CRISPR genome editing technology. CRISPR-VR is suited for all ages and educational backgrounds. Concepts covered in this immersive VR experience include: • The Central Dogma: The transmission of genetic information from DNA to RNA to protein is visually captured in CRISPR-VR. Exploring environments such as the nucleus and endoplasmic reticulum even showcase how polymerases and ribosomes synthesize macromolecules. • Biological Scale: From meters down to nanometers, these VR scenes bring a new perspective to the natural world. When you land in a new environment, the level magnification appears on-screen. Get a sense of the relative sizes of biological components like DNA molecules and red blood cells. • Gene Editing: CRISPR is a rapidly advancing biotechnology capable of treating a range of genetic diseases. CRISPR-VR walks the user through the process of locating, cutting, and repairing a DNA sequence in order to treat sickle cell disease.